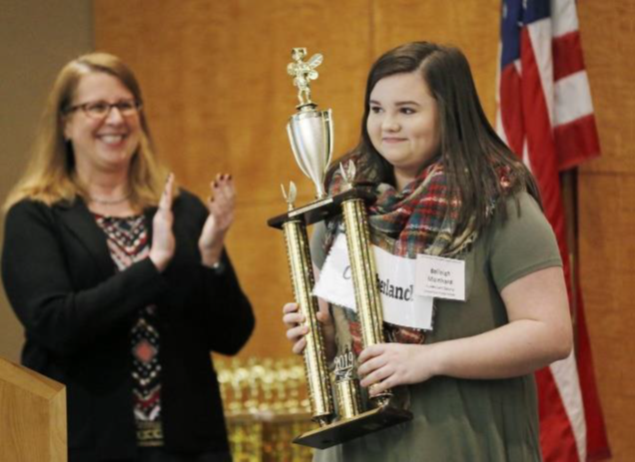 Baileigh received a Merriam-Webster’s dictionary, courtesy of Scripp’s National Spelling Bee and the Richmond Times-Dispatch. She will advance to the regional competition to be held on March 9, 2017, at the Library of Virginia in downtown Richmond. The winner of the Regional Spelling Bee will receive a $1,500 scholarship and an all-expenses-paid family trip to the 2017 Scripps National Spelling Bee.

The Scripps National Spelling Bee is the nation’s largest and longest-running educational promotion, having been conducted for over 9 decades, and is sponsored by the E. W. Scripps Company. Local competitions are co-sponsored by newspapers, such as the Times-Dispatch, or other high-profile community organizations and businesses. The spelling bee was established to “help students improve their spelling, increase their vocabularies, learn concepts, and develop correct English usage that will help them all their lives.” To participate in the contest, students must be under 16 years of age, be enrolled in 8thgrade or below, and attend a school which has officially enrolled in the program.